Turkish Energy Minister Taner Y?ld?z and U.S. Secretary of Energy Ernest Moniz signed a memorandum of understanding on improving clean wind energy between Turkey and the U.S. on Nov. 20. The two ministers also said more cooperation is on the road ahead between the two countries in clean energies, and perhaps even nuclear energy.

“The agreement is one step towards a stronger relationship between our countries in economic development, clean energy and addressing our mutual concerns on energy security,” said Moniz.

Y?ld?z said both countries wanted wind turbines with an installed power of 3,000 megawatts to be manufactured in Turkey, and targeted at least $500 million worth of investments.

“Turkey had an installed capacity of 19 megawatts twelve years ago. Now, this is up to over 3,500 megawatts. We aim to encourage the production of wind turbines in Turkey and more cooperation between American and Turkish companies,” he said.

The two ministers also discussed the possibility of further collaboration on the construction of nuclear power plants in Turkey, said Moniz.

“In the U.S., we remain committed to nuclear power. We are promoting small reactors between 50-200 megawatts for the future,” he added.

Y?ld?z said the U.S.’s policies on nuclear, coal and renewable energy were praiseworthy, while nuclear energy is integral for Turkey to diversify its energy sources. He also stated that Turkey and Japan had agreed to make a hosting country agreement for the second nuclear power plant in Turkey.

“I believe the hosting country agreement will pass through our Parliament by the end of this month, or the beginning of December,” Y?ld?z said at the Q&A session with reporters after the signing ceremony.

The volume of Russian natural gas from the West Line to Turkey has recently fallen by 40 percent, Y?ld?z also noted, although he did not want to comment on the reason for the decrease.

“Russia’s daily natural gas delivery to Turkey has decreased by nearly 40 percent, which is not good news for Turkey,” he said, adding that the volume of gas from the West Line has fallen from 42 to 27-28 million cubic meters per day.

“The amount should increase again to the contract level. Turkey pays its dues on time,” he added. 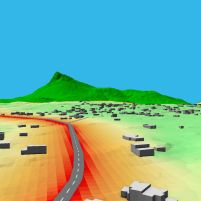